I first published this post in 2012. At the time, mezcal was little known. And while the battle for recognition is still uphill, mezcal is far more popular today than it was back then. Since 2012, mezcal sales are up almost four times, and the vast majority of bars, restaurants and liquor stores, carry at least one brand.

I still spend a lot of time spreading the gospel of mezcal, and more times than not, the conversation begins with the comparison of mezcal to tequila. I use it as an opener at cocktail parties. I just walk up to a random person and ask them “Do you know what the difference is between tequila and mezcal?” They usually turn and walk away. OK, maybe that is not the way it goes down, but it could happen that way!

But this question usually is the starting point when people are curious about mezcal.  In many ways, mezcal can best be understood by simply tasting it next to tequila. What will you find? Most notably, you will find mezcal to be smoky by comparison. Intense and smoky like a campfire to some, or subtle and gentle to others. The person who finds the smoke to be light is usually a scotch, bourbon or whiskey drinker, and is used to bold spirits. If you find mezcal to be intensely smoky, there is a good chance you are not accustomed to drinking spirits neat.

This post gives you the basics, but if you really want to understand and appreciate what separates mezcal from tequila, you need to read my book Holy Smoke! It’s Mezcal!  (shameless self-promotion perhaps, but hey, the blog is free so this is my form of selling ad space!).  The book is available on Amazon.  Notice the cool cover shot to the right.  Buy a copy – I promise you won’t be disappointed!  Now back to our regularly scheduled program…

I believe that for most people tequila leads to mezcal (even though all tequilas are mezcals, but we will come back to that).  Tequila leads to mezcal because for most of us, it started with tequila.  We traveled down a path that likely started with bad tequila, bad experiences, and bad results the next morning.  Then we slowly found our way back to the good 100% agave tequilas that started showing up in the 90’s.  And maybe we enjoyed the extra anejos that move tequila toward cognac.  And then, what?  What else is out there?  Ahhh mezcal….I’ve heard about that.  The rise of the extra anejos coincided with the arrival of fine mezcals and then they started to appear on the shelves at your local liquor store and on the cocktails menus of your favorite gin joints.  So tequila brought us to this point and now mezcal joins the discussion….

There are three key reasons why mezcal is different from tequila:

Tequila and Mezcal are Produced in Different Regions

First, you must know that all tequilas are mezcals.  Mezcals are any agave-based liquor, and therefore tequila is a subset of mezcal produced in specific regions of Mexico and made only from the Blue Agave.  Tequila is made in 5 specific regions: Jalisco, Michoacan, Guanajuato, Nayarit, and Tamaulipas.  Jalisco is definitely the center of the tequila universe and where the town of Tequila (yes, there is a town named Tequila) is located.

Mezcal is made in 9 specific regions of Mexico:  Oaxaca, Durango, Guanajuato, Guerrero, San Luis Potosi, Tamaulipas, Zacatecas, Michoacan, and Puebla.  Oaxaca is the center of the mezcal world, as about 80%% of mezcals are made in Oaxaca. In the summer of 2018, 3 new states were provisionally approved to produce mezcal (México, Aguascalientes, and Morelos). The extension of the mezcal Denomination of Origin to these states is currently being challenged, so they may or may not make it to official status.

Tequila and Mezcal are Made From Different Varieties of Agave

Tequila must be made from the Blue Agave.  Mezcal, on the other hand, can be made from more than 50 varieties of agave, including the Blue Agave.  See my previous post on How Many Agave Varieties Can Be Used To Make Mezcal for a lengthy, and some say fascinating (maybe that’s just me) discussion.  But know that most mezcals are made from the Agave Espadin, which is the most prevalent agave variety found in Oaxaca.

The Production Process is Different

They have these long spear-like leaves.  At harvest, the leaves are sheared off by the jimador (the person doing the harvesting) who uses a coa, a long-handled stick with a sharp, flat blade at the end.  Once the leaves are off, what is left is called the “pina” because it looks like a large pineapple. 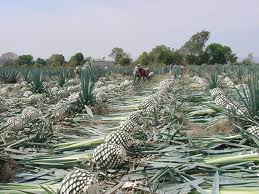 Up until this point, a tequila harvest and a mezcal harvest is essentially the same (with different varieties of agave).  How the pina is cooked is where the process differs dramatically.

With tequila, the pinas are cooked in large industrial ovens, known as autoclaves, which are large, stainless-steel industrial pressure cookers. (note: there are other methods of cooking and crushing the pinas but this is the most common).  Then the cooked agave is shredded and fermented blah blah blah.  So uninteresting.  So industrial.  So mass production.  So boring!  (Can you feel the mezcal bias brewing?)

With artisanal mezcal, the process is much more handcrafted and follows the process that has been used for hundreds of years.  I stress the word “artisanal” because some mezcals, like Kimo Sabe (which sucks, by the way), use a very industrial process much like a mass-produced tequila.  But the premium mezcals, which I regularly discuss on this blog, use the traditional production method.  With artisanal mezcal production, the pinas are cooked in an underground, earthen pit.  The pit is typically about ten feet wide and t 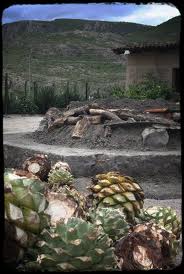 en feet deep, and cone-shaped down to the bottom.  It is lined with volcanic rock.  A fire is started in the bottom with wood.  This fire burns to the embers heating the volcanic rocks to extreme heat.  The pinas are then piled into the pit and covered with about a foot of earth.  This underground “oven” now smokes, cooks and caramelizes the pina over a multi-day cooking process.  The picture on the left here shows a covered pit and the pinas are cooking beneath the earthen mound.  The pinas in the foreground are for show (or perhaps, they are just happily waiting their turn at glory to be smoked and turned into glorious mezcal!).  It is largely this underground baking process that imparts the smoky flavor to a mezcal.

The artisanal mezcal process continues once the pinas are cooked and unearthed.  The 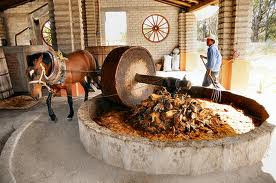 crushing process for the agave is traditionally done with a tahona (pictured here).  Yes, it is a horse or donkey pulling a large stone wheel around in a circle.  You see the cooked agave being crushed in the center of the wheel.  This is cool, hand-crafted stuff!  This entire process basically happens on a farm (or “palenque”) and is overseen by a Master Mezcalero.  So when you see a premium mezcal for $50, $100, or even $200 a bottle, know that you are paying for a bottle of drinkable art that has been made this way since the 1600’s.  And if someone says, “I can’t believe you paid $100 for a bottle of mezcal!”  Just smile, pat them on the head, and call them grasshopper.

So that, my friends, is why mezcal is different than tequila at a basic level.  Of course, there is much more to it if you start talking about culture, history, CRM vs. CRT, and the list is longer still.  But the above list of three key differences will have you more informed than 99% of the population. 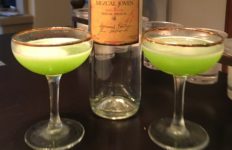