lant and of fertility (if you are going to be a goddess, those are two great things to rule!).  As you can see from the photo, she was quite a looker in her day.  Mayahuel got hammered one night and hooked up with Patecatl, who is also a pulque god.  In the most glorious one night stand in history, their union produced 400 children!  But these were not just any 400 brothers and sisters.  They were rock stars and super models – promoting madness and mayhem at every turn.

Once born, Mayahuel fed her little cherubs pulque from her breasts.  While this image unfortunately does not seem to depict her 400 breasts, I am sure it made for quite a sight!  The pulque made the Centzon Totochtin (“the 400 Rabbits”) happy.  They were the liveliest, most partying, agave lovin’, drunken rabbits you’ll ever know.  Think of Lindsay Lohan as a fluffy, fuzzy, cuddly little fur ball! 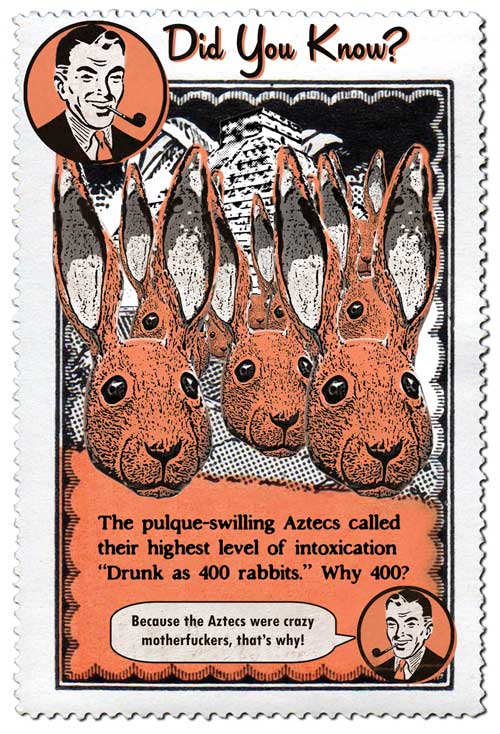 As we all know, mezcal is growing in popularity, and with that, the legend of the 400 Rabbits is growing too.  A new bar opened in Austin this past month called 400 Rabbits (the website is not much yet, but here is the link http://www.400rabbitsbar.com/).

Austin also has Bar Ilegal at the Clive Bar (http://clivebar.com/), which is by all accounts an awesome little hideout serving Ilegal and Ilegal cocktails. I have not been to Austin lately, but for some strange reason, I am getting the urge….