Now that’s what I’m talkin’ about!  Let’s review the basics of Mezcal (just the facts ma’am):

That is a starter kit on mezcal.  There are many other great resources on the web if you want to dig deeper.  From time to time, I too will dig deeper, but for now, we leave it there.  If you want more immediate depth, check out Ian Chadwick’s website at http://www.ianchadwick.com/tequila/mezcal.htm.  It is full of great depth on the subject of mezcal (and tequila) even if some of the information is a bit dated.  I don’t know Ian, but I think I like him…. 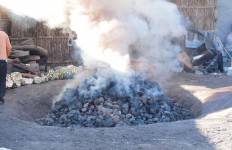