I am just back from an unbelievable Mezcal Fest (Mezcal: Mexico in a Bottle) that was put on this weekend in San Francisco by my friends at Mezcalistas.  They are likely to make this an annual event so pay attention next year and do what you have to do to get there!  It was of the finest collection of mezcals you will ever see (unless you come to my apartment!) with most of the top brands and many many offerings that can only be found in Mexico.  The event has me dreaming of wild agaves and beautiful mezcals with luscious flavors swirling down my throat.  So it seems appropriate to put up this post on arroqueños, which has been lingering in my draft file for too long!

If you are a regular reader of this blog or have read my book Holy Smoke! It’s Mezcal!, you are likely aware of the ongoing lovefest I have with mezcals made from Agave americana var. oaxacensis, sub-varietal arroqueño (say that ten times fast!).  Or simply known as an arroqueño.  Arroqueños are HUGE agaves and known to be the genetic mother of the Agave espadin (A. angustifolia), the most common type of agave from which mezcal is made.

So arroqueño is related to espadin and the taste profile is consistent with their respective genetics.  However, my palate finds an arroqueño to be like a turbo-charged version of an espadin – powerful fruit and roasted agave surging upfront with great viscosity and a long lovely finish.  And unlike some other wild agave varietals, an arroqueño has nothing polarizing in the flavor.  My golf analogy would be that an arroqueño is a beautiful 325 yard drive right down the middle of the fairway – while I am not a golfer, that is one long drive.  While it is smack down the middle, an arroqueño surpasses almost all others.  You taste a great arroqueño and you instantly understand why people like me are nuts about mezcal (Me?  Nuts about mezcal?  Well OK, a tiny bit…).

As you may guess, I search out every bottle and brand of arroqueño I can find, and happily that are now several brands available in the U.S.  Also, I have collected a few others in my travels that cannot yet be found stateside.  So as I was surveying my mezcal collection, I realized that I now have eight unique bottles of arroqueño.  What a gift from the agave gods!  Here is what I have:

So I’ve been drinking these with my friends and fellow mezcal junkies, and also shipping multiple vials back and forth (don’t tell the Feds!) with my friend Mario who lives on the West Coast to share impressions on this handful of great mezcals.  But due to random comings and goings of my friends, and varied acquisition times of bottles, we were unfortunately unable to do a full scale side-by-side tasting of these arroqueños.  Still, some favorites emerged from our machinations and what follows is a collection of our opinions.

Key contributors were my friend John who has a mezcal palate that far exceeds mine (not hard to do) so he is a real asset to have around a bottle of mezcal  – which he always seems to have with him!  And my afore mentioned friend Mario, who if you read my book, you would know has undergone a Faceoff-like transformation from mezcal doubter to mezcal evangelist (and who’s with me on the Faceoff reference??!!).

A few comments on the bottles.  Of the eight listed, five can be found in the U.S.: Mezcalero, Vago, Jolgorio, Del Maguey, and MarcaNegra.  You probably have to buy them online unless you have a very good local liquor store.  On Mezcalero, all other Mezcalero releases (two through eight – I never did see Release #1 and am not sure it ever existed) are ensembles and most are excellent.  So I was psyched when Release #9 came out as a single expression arroqueño.  Siete Misterios was the first arroqueño available in the U.S. and it wows, but sadly can no longer be found – let’s hope it does a Lebron and returns to Cleveland….er….uh….the U.S.  MarcaNegra has just released three new offerings to complement their fine espadin and tobala – they now have this arroqueño, a dobadan, and a yummy ensemble.

Vago and Jolgorio are relative newcomers to the scene (both arrived in 2013) and they each have several amazing mezcals.  You see the Nizabisahio brand regularly in the Oaxaca area and it means “spiritual water of kindness” in Zapotec….very calming.  And I obtained a specially bottled arroqueño at the Destileria Tlacolula which is where Ilegal is produced.  The producer had made a batch of mezcal with arroqueños and he was not sure what he was going to do with it.  I thought giving a bottle to me was a great idea!  OK, I paid for it, and gladly.

That all said, here are our collective impressions.

So where does that leave us?  Well, the two underperformers were the Mezcalero and Nizabisahio.  I was the only one who tried the Niza and I would put it at the bottom of the list, though let’s be clear it is still a fine mezcal just not as good as the rest.  The Mezcalero was good but both John and Mario had it at the bottom of their final list (they each only tried four of the eight).  But to tell you how good all of these are, Mario initially thought the Mezcalero was one of the best, but once revisited, he moved it down.  The things you taste in a mezcal change based on who you are drinking with, the time of day, what you are eating, and many other factors.  There are few absolutes so I always try to revisit bottles even if my initial impressions were not favorable.

The Vago was John’s top choice (among his four of Vago, Tlacolula, Siete and Mezcalero) with the Tlacolula a close second.  As I said he is a true mezcal lover and this is made for someone like him.  Mario found the Vago to be excellent but he was looking for more true arroqueño, which is not the strength of this bottle.  Me?  I love it.  It is dark and mysterious and wonderfully complex as described above, but I would never guess it is an arroqueño.

The Jolgorio is outstanding and clearly near the top.  Mario found it to be the brightest mezcal he had ever tasted and speculated that the agaves are planted among a lot of citrus trees (Kaj?).  Yet, his top pick remains the Siete.  Perhaps like me, he holds a special place in his heart (or palate) for his first love, and the Siete arroqueño was in the U.S. before the others, so that positive bias is hard to shake.  So he has the Siete at the top with the Jolgorio a close second.

My turn.  The bottles in the top five are easy to choose, but ranking them is more challenging.  In no particular order yet, Vago, Jolgorio, Tlacolula, Del Maguey, and MarcaNegra.  You cannot go wrong with any of these five and don’t hesitate to spend your hard earned cash if you want an awesome mezcal.  You will notice that sadly, Siete does not make the top five and has drifted away for me on a comparative basis.  Still a great mezcal but these other five get the edge here.

I think for me, the Jolgorio and the Del Maguey are neck and neck for my favorite arroqueño.  While I love the Vago, it is just not arroqueño-y enough!  The Tlacolula has a bit too much alcohol on the finish so it falls back as does the MarcaNegra for similar reasons.  Hmmm…..Jolgorio or Del Maguey……Del Maguey or Jolgorio?  Caddyshack or Stripes?  How can you choose??

In a photo finish I think I give the nod to the Del Maguey because in my mind it is exactly what an arroqueño should be:  robust, fruity, smooth, light smoke and heat, velvety texture, and a lovely long roasted agave finish.  The Jolgorio is right there as well, and I am really splitting hairs here with almost all of these great mezcals (I might set the Nizabisahio aside).  As suggested, there are no mistakes among MarcaNegra, Del Maguey, Vago, Jolgorio, or Mezcalero (these are the five you can find in the U.S.).  With a virtual certainty, I could go through round after round of tasting and reach different conclusions every time – they are all that good!

Arroqueños can take up to 30yrs to grow in the wild, though closer to 15yrs with some maintenance.  So who knows what the future will hold with respect to their availability – like all agaves, the resource is not infinite.  My recommendation is to buy them now because there is no guaranty you will find them in the future.  You can tell your kids about them someday!!

That’s all for now and as always, drink mezcal! 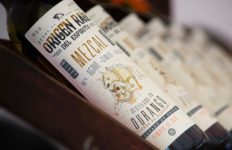 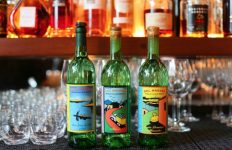